When I was just 11 years old we were camping in Switzerland; I believe by Lake Murten, unfortunately it was very rainy….My parents decided we should move southwards and set on the roads to France.
It was at a French campsite where we met a lovely old couple by the name of Frank & Connie, they were travelling back to the UK. They told us of a place where there was warm sunshine to be found. Apparently the clouds normally avoided this particular area?
We followed their instructions and ended up at a campsite by the name of Camping Le Bregoux, found in a little French village in the Vaucluse called Aubignan. This campsite was run by a very warm and friendly family by the name of Farrugia; we spent many a happy year here. It was here that I learnt in the early days that you should not drink too much wine.


I also believe that it was Frank & Connie that introduced us to Domaine De L’Espigouette, run by the Latour family; Edmond Latour et Fils. I began to learn about wine, and of course wine tasting. We have continued to visit this vineyard every year, it is now run by Bernard Latour his wife and 2 sons Julien & Emilien. 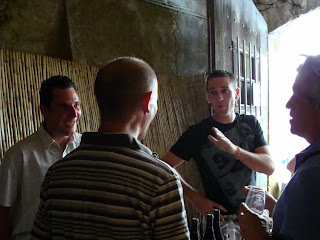