Pierre Le Roy de Boiseaumarie the founder of 'Le Syndicat des Vignerons des Cotes du Rhone'. Born in Normandy the 5th April 1890 and lived to June 1967. He was involved in significant roles within French Viticulture right up until his death.

He moved to Languedoc in 1907 during an uprising of the winemakers of Le Midi and he was involved in demonstrations. The winemakers asked for his help as they had been suffering form a drop in wine sales and also from fraud.

In 1923 he founded 'Le Syndicat des Vignerons' and battled hard for 10 years to obtain recognition of the Apellation of Chateauneuf Du Pape.

A bust dedicated to him can be found in the village of St Cecile Les Vignes. 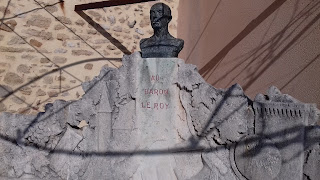